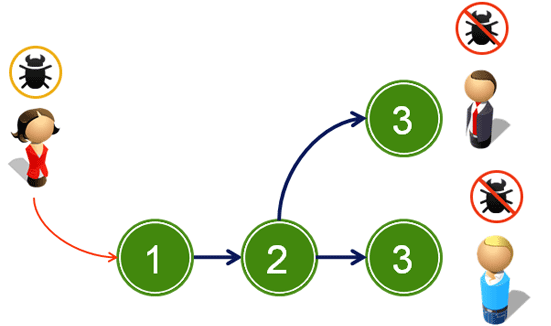 Bug tracking is a process that mainly falls in the to-dos of the quality crew and programmers to keep a check of the software issues and resolutions. A bug tracking system ideally saves information about any bug reported in the software, it keeps a track of the bugs in software and trails them until they are addressed and fixed. With this system we can achieve a clear, consolidate synopsis of development requests and their corresponding states. Mostly projects have their own bug tracking systems, wherein the source code is often available for other projects too.

Bug tracker system logs in bugs’ reports and tracks them till it’s sorted. Effective use of this bug tracking system exemplifies a meticulous software team’s skilled behaviour. Bug tracking systems include a database, which keeps track of facts pertaining to each bug. The details of a bug tracker may include: the time of reporting of bug, its harshness, the fault in the behaviour, the programmer’s action to fix the bug and who reported the bug. Each bug is assigned a status and thus bugs are tracked on the basis of their status as they are linked to the bug cycle. With this, the administrators can act upon the bugs’ status and perform the necessary action.

Finding bugs manually is no harm but bug tracking requires magnitude of steps so in order to have a strong mechanism to carry out and manage the issues in a convenient way, a bug tracking system/software is the best possible solution.

Let’s talk about some open source bug tracking systems that QA’s can experiment and choose based on their requirement.

JIRA
More than just an issue tracker, JIRA is an extensible platform that you can customize to match your business processes. JIRAs flexibility makes it great for all kinds of projects. The tracker of choice for over 22,000 companies track more than just bugs and tasks – it helps you plan agile development and deliver great software.

Bugzilla
One of the leading bug tracking tools which is very simple to use as it has a web based interface. For example, Linux kernel development team, Apache development team, GNOME development team uses bugzilla. Red Hat also uses bugzilla to track the issues found in Red Hat Distribution system. It is completely open sourced and is free to use. Bugzilla is written in Perl, and works on various databases including MySQL and Oracle.

Mantis
Mantis has all the features that one can possibly hope for. It is available in both web and mobile versions.  It is implemented in PHP and is free for use. Mantis issue tracking system is written in PHP, and works on various databases including MySQL, MS SQL, and PostgreSQL.

The Bug Genie
Bug Genie is not just a bug tracking tool rather a complete project management and bug tracking tool that integrates the open Search functionality, integrates with subversion and you can develop customised modules. Also, it supports Agile projects. Bug genie is written in PHP.

Redmine
Redmine, an open source issue tracking system that integrates with source code management systems (SCM) as well. It is not considered as a bug tracking tool but it provides a full project management features that includes working with issues, tasks, bugs etc. Redmine is written in Ruby on Rails and is a web application that works through many platforms but Ruby’s presence is mandatory.

Trac
Trac cannot be specifically called a bug tracking system as it also provides wiki and integration to subversion. It is written using Python and is web based and is easy to use. The issues/incidents in Trac are referred to as ‘tickets’ and the ticket management system can be used for defect management as well.

Request Tracker
Also known as RT, it is written in Perl. It can be guessed by the name ‘Request Tracker’- it tracks tickets logged in for bugs.

WebIssues
WebIssue is written in PHP, and uses MySQL database for the server side. You need WebIssues client that runs on Windows, or Linux to access the server component.

Of course, there are innumerable tools available in the market ranging from best to average to poor. This blog has suggested you few of the best bug tracking tools that you can opt for. Happy Tracking!