With the ever-growing technology, one can find a number of applications that have flourished the market in recent times. In addition, users’ expectation with such applications has added the need to have an application that is compatible across various platforms. The expectation could differ from person to person. For example, some applications might require to just upgrade their previous version. However, some might require a major change, especially while making an application platform independent. In either of the case, there is a huge accumulation of code that’s needed to be validated. Testing the piled up code could be difficult and time taking.

There are various models that are being used to perform testing across the software industry. Irrespective of the kind of model used, the testing team uses the same iterative model, as shown below. 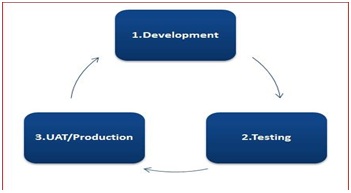 Though the model looks very simple and robust in its approach, but there are various challenges that are faced by the testing teams. It includes various operational challenges, as discussed below.

The Time of Delivery: The delivery timeline is an important aspect in the software development life cycle. However, with frequent change requests and the pressure to deliver the product on estimated time, the development team often ends up compromising with quality testing.

Development Phase: The testing phase requires adequate time for an error free application. However, with the misconception of considering the development phase superior to the testing phase leads to poor product quality.

Developers and Testers: Developers and testers are equally important for the quality of a product.  However, it does not necessarily means that they need to work together under the same roof. It is seen that the quality of a product is more inferior where both development and testing teams work together, especially in the service based delivery set-ups.

Similar kinds of challenges are found where development teams and test teams work in parallel. In order to overcome various challenges, there is a need of independent software testing, which is slowly picking up pace.

Some of the advantages of performing independent testing are discussed below.

Different Perspective: Testers mind is often influenced by the developers approach for a product building decision. An independent testing would bring a better approach that could help in detecting flaws, which remains often undetected by the developers.

Detects different kinds of bug:  In majority of the cases, common bugs are detected in the early stages of software testing, which is commonly referred to as “pesticide of paradox”. However, with independent testing, there is always a scope of detecting a new bug.

Dedicated Testing: There is a certain time allocated for each phase in a software development lifecycle. A specialized team for software testing assures proper time management and proves to be very economical.

In spite of having so many advantages, there are a few considerations that need to be kept in mind. Some of them are discussed below.