When is the Right Time for Continuous Testing? 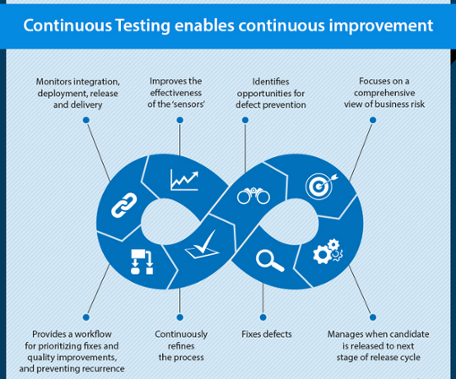 Continuous testing saves a lot of time and resources if implemented at every stage of the development process.  However, it might mean different at different stages of production.

When does continuous testing take place?

As said, it starts from production and goes till production. It ensures faster shipping of code and provides high quality releases. By focusing more on earlier testing, you can find more bugs making your product faster to the market.

Testing should go with the development. Testing the code before it is merged into the main code base is always helpful. This refers to unit testing, which is the main focus of continuous testing in development. There are many companies that prefer test driven development over writing code. Unit testing or some functional testing catches and resolves bug quickly, if started earlier.

In staging, the focus remains on customer. By pushing the application to its limits, you can find new bugs and then write tests. Though the functional and regression testing starts in development, staging is the phase where exploratory and end-to-end testing comes into the picture. However, in order to ensure products standard and usability, Usability, Integration, and Acceptance testing happen as well.

Test cases start to become stable as soon as a feature reaches production. Automation seems to be a more feasible option at this stage; i.e. when the product is not changing often. Some of the other important tests that can be executed include Smoke and Sanity tests. This is to ensure that the feature is working properly and are often run manually. Here, the release is checked by the QA by running a couple of tests. One other reason for these tests to be not automated is to emulate the actual user experience.

You may also like: The Existing Challenges of Continuous Integration (CI)